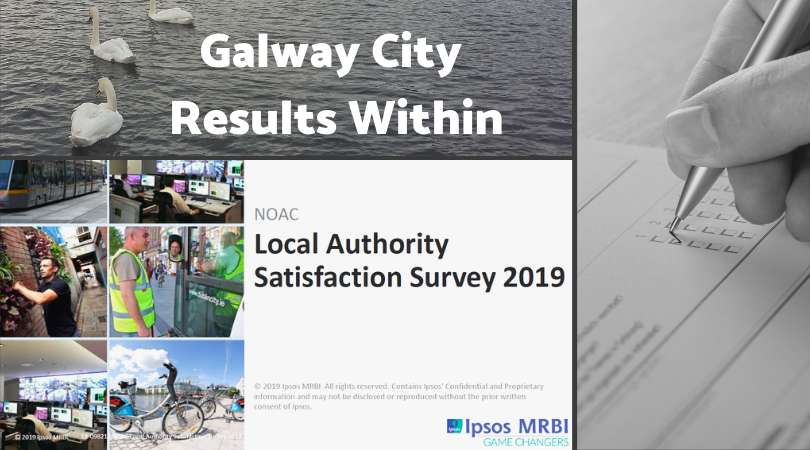 The National Oversight and Audit (NOAC) recently published its findings for the Local Authority Satisfaction Survey 2019.

Over the past 2 years, NOAC has worked with IPSOS MRBI to survey public attitudes to Local Authorities and the public’s satisfaction with their own Local Authority.

The interviews took place in March 2019 and show an overall positive perception of Local Councils and average satisfaction levels among the majority of respondents. However, perceptions of transparency and efficiency are less positive (see Survey below, page 17).

The most important services provided by the council fell into four main categories: roads and road safety, housing, amenities and environmental protection.

A closer look at Galway City

In the first part of the survey, the combined findings collected in 2018 and 2019 from twentyone Local Authority areas show that Galway City places itself in an average position with a 59% level of satisfaction with the Local Council (see Survey, page 8).

The highest score registered for Galway City was a 71% agreement that the Local Council promotes economic activity, placing Galway City above the average in this case (see Survey, page 11). Galway City maintains the average position in all the other situations.

The second part of the survey focuses on the data collected only this year from the second batch of Local Authority areas. 1,144 respondents were interviewed acros eleven areas, including Galway City. For this survey 100 Galwegians were picked following a random systematic selection of 47 males and 53 females across the city (see Survey, page 56).

The 2019 findings show that Galway City tends to keep an average position in most areas placing itself below average only in one situation. With a 74% expressed knowledge of the Local Council, Galway scores the lowest among the other ten Local Authority areas. The highest score, in this case, was Wicklow’s 98% (see Survey, page 33).

Nonetheless, 33% of the Galway City respondents feel informed by the Council placing Galway City close to the average level of 41% (see Survey, page 35).

Among the most important factors for making somewhere a good place to live/work in, the top three choices expressed by the Galway City respondents were wage levels, affordable decent housing and the level of traffic congestion.

Taken in their totality, the Local Authority Satisfaction Survey 2019 results emphasise that the work councils do for their residents is generally beneficial and well received, but there is also room for improvement.

See the survey available for download below for a detailed infographic on the levels of:

Funding for Men’s and Women’s Sheds Under The Community Enhancement Programme...