GCCN Statement of Solidarity with the Traveller Community – September 2022

You are here: News1 / Members News2 / GCCN Statement of Solidarity with the Traveller Community – September... / Events3

GCCN Statement of Solidarity with the Traveller Community

Galway City Community Network (GCCN) stands in solidarity with the Traveller Community and all marginalised communities calling for the elimination of racism and discrimination. GCCN calls for accountability from people who hold public office.

Considering the recent statement made by Cllr Michael Crowe on the Keith Finnegan Show (Galway Bay FM) on the morning of the 26th of September 2022, GCCN wishes to express our condemnation to such racist and discriminatory comments. GCCN also wishes to offer our complete and unequivocal support to the Galway Traveller Movement (GTM) and the wider Traveller Community, including full support for the statement made by GTM (please see below) that includes calls for the suspension of Cllr Crowe pending further investigation.

We find it extremely frustrating and disappointing that, during the same week of the launch of Misleór, a festival celebrating nomadic cultures, including Traveller culture, the focus is once again on a public representative promoting anti-Traveller rhetoric in the local media.

Galway City prides itself on being a diverse and welcoming city, a city where almost 25% of its population was born outside of Ireland. This diversity includes people from a whole variety of backgrounds, including the largest Traveller Community in Ireland. We cannot and will not allow any public representative to create divisions within our richly diverse community in Galway by spreading dangerous and hateful sentiment on local media platforms.

There are a number of concerning question marks surrounding some of the comments made on the Keith Finnegan show. During the interview, Mr Crowe stated:

“ So, over the last week or so I been onto, speaking and met with housing officials on this matter and it was confirmed to me at the end of last week that the property has been purchased for the intention of Traveller accommodation.”

Mr Crowe later stated the following during the interview:

This is false information and misleads the public as to the power of the councillors to influence executive functions while only drawing attention to the family at the heart of matter. GCCN is concerned that this statement could set a dangerous precedent. It suggests that individual public representatives might have a say in and can retrieve information about the allocation of social housing. Information that then can be used for discrimination on different grounds.

GCCN would like to request clarification on the procedures around Galway City Council Housing Officials informing public representatives on who is allocated social housing in the city and where that housing is located.

Mr Crowe also stated the following on the show:

“I have broad concerns… first of all, I want to put it on the record that everybody is entitled to a home, and everybody is entitled to be housed, but I do not believe that putting members of the Travelling community into the heart of Renmore is conducive to either the occupants of the house themselves or indeed the local community. They’re two vastly different cultures … I know the area very well; I know a lot of the residents very well and ultimately; I don’t believe it’s in the best interest of either party for this to proceed…”

GCCN condemns Cllr Crowe’s comments suggesting that people from “vastly different cultures” cannot live together within the same community. This assertion is, in fact, contradicted by Galway City Council figures – which show 671 Traveller families accommodated, with 594 of these families (88%) living in houses in other City communities.  We are strongly concerned that this type of messaging promotes the segregation of communities in Galway City.

The value of human lives needs to be the central piece of the discussions. We are in the midst of a deepening housing crisis and more than half of families accessing emergency accommodation come from the Traveller Community. This community continues to face acute discrimination in terms of housing provision and denying their right of access to social housing is in contravention of human rights.

GCCN wish to take this opportunity to remind the Local Authority as a public body must carry out its duties in line with Public Sector, Equality and Human Rights Duty (2014) and any attempt to thwart this duty by elected representatives is inappropriate.

Galway Traveller Movement condemn statements made by Cll Michael Crowe on the Keith Finnegan show on the morning of the 26th of September.

He has brought the integrity of his office into disrepute by promoting anti Traveller rhetoric and discourse on the public airwaves. There are also ethical issues to be answered by Galway Bay FM who facilitated this discussion to happen with no opposing voices.

We are calling for Cll Michael Crowe to be suspended from his duties pending a full investigation by Galway City Council and the Fianna Fáil Party into this matter.

Galway City have just held the 6th meeting of the Council of Europe Committee of Experts on Roma and Traveller Issues hosted by the University of Galway. This committee made up of 35 international experts visited the families on the Carrowbrown halting sites and were devastated and shocked that the Local Authority think that it is appropriate to have human beings including 70 children living beside a major waste facility and a decommissioned dump. The local Authority are failing the Traveller community in relation to delivery on their Traveller Accommodation Programme.

We are asking citizens of Galway and Civil Society to stand in solidarity and take action with the Traveller Community calling for the elimination of racism against this community. We need to call for accountability from people who hold public office.

GTM will be making formal complaints to the Fianna Fáil Party, the  Irish Human Rights and Equality  Commission, the Standards in Public Office Commission,  the Broadcasting Authority of Ireland and the Council of Europe committee of experts on Roma and Traveller Issues to further investigate this violation of Traveller’s Human Rights and call for justice and redress. 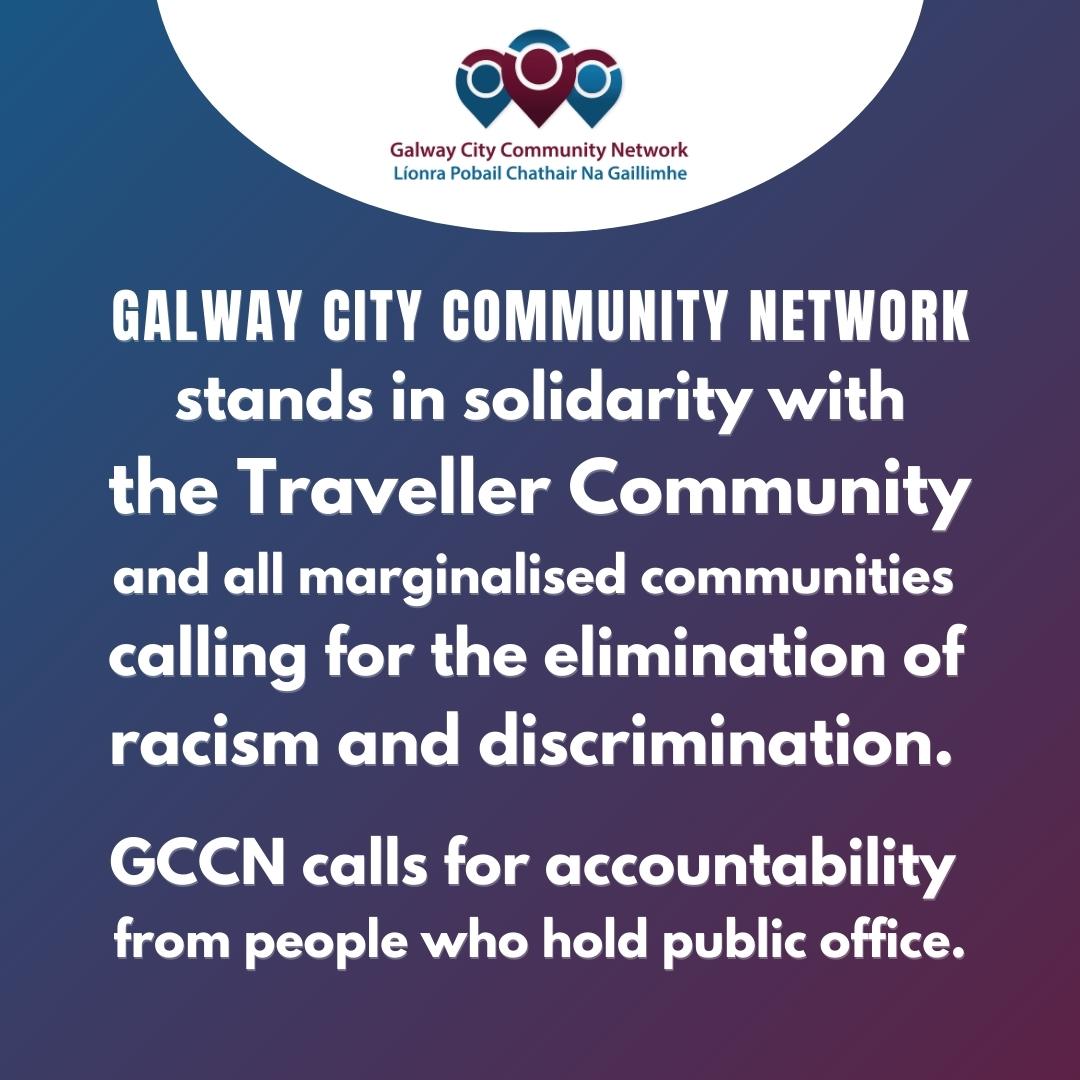