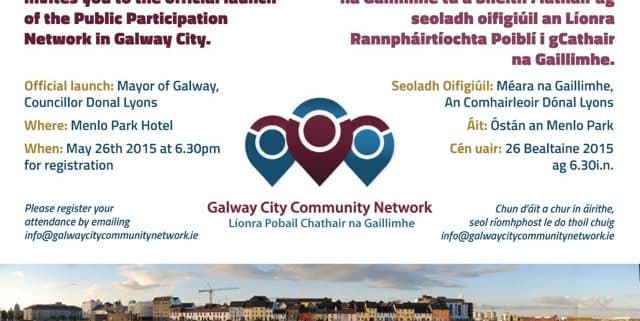 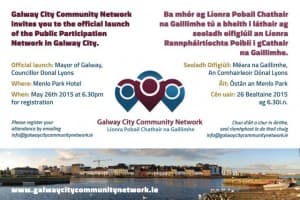 Galway City Community Network was officially launched by the Mayor of Galway, Councillor Donal Lyons on May 26th.

Commenting on the event, Tommy Flaherty GCCN Chairperson said, ‘We are delighted with the support of the Mayor and the City Manager, as well as all our members who came to the launch’.

The Mayor of Galway, Councillor Donal Lyons, congratulated Galway City Community Network for being one of the first and most successful Public Participation Networks anywhere in the country. He stated that he is someone that believes in community development and social inclusion and said that it was important that Galway City Community Network keeps this core to its agenda.

The Mayor acknowledged the voluntary work of Galway City Community Network representatives on the various decision and policy making bodies in the city. The participation of civil society, community, voluntary and environmental groups, organisations and indeed communities, he said, is a crucial part of a participative democracy and vital to the healthy functioning of this city, ‘It complements our role as elected representatives and enhances policy development and implementation.’

Ann Irwin, Galway City Community Network Co-ordinator, urged all members and interested members of the public to get behind the Statement of Wellbeing that is being developed for the city. She said, ‘We are working with international experts Professor Benjamin Broom from the University of Arizona and Dr Mike Hogan from NUI Galway to look at how we can ensure that wellbeing is at the heart of our society, economy and communities. But we need people to come along on June 6th to help us to do this.’ All the details for registration are on the Galway City Community Network website, www.galwaycitycommunitynetwork.ie.

Meeting of the Planning SPC May 14th

Statement of Wellbeing for This and Future Generations